India - Who Are We - A painful tale of a Nation who is in search of itself.

Govt commentary and accepting that we are now 5% growth GDP is worry for everyone now, because we need 12% GDP to make 5T Economy in 6+ years. This will put lots of pressure on Govt to reforms. But India has its own issues of diversity, population and anti-national elements which wanted to destroy any chance to grow the nation. It is really disheartening to see that this nation's exFM Chidambaram destroyed best IT product this nation has ever developed called MCX exchange. Congress was cancer to nation, while Modi-Amit more busy cleaning up the house. It makes sense because when we go outside of house to do business we make it sure house in order. Its hard to believe a few facts which I got that even Govt was looked sold sometime in the past. You read NCERT syllabus prepared by leftist ideology talks utter nonsense. We are brainwashing our kids? Its shame. I feel INDIANs are most irresponsible citizen. They are most hippocratic. They accept situation as destiny. New generation looks busy in selfies, social media and weird hair style. Still I feel bright spots will emerge and Gen Y will lead it. They are new hippies. I have a lot to talk but some other day. Probably will write a paper.

We are a Nation who lost its PRIDE centuries ago. We are manipulated to think ALL IS WELL, Accept shitting Infra as realities, Accept no digital infra as normal signal issues, Accept highly inflation real estate as destiny, Accept 12-15% cost of capital as normal, Accept third class education with super class price as normal, Accept that we are less civilized than west in culture, Our most lands are all in mess in title issues, Our courts are full of cases and justice is most corrupt system, Accept traffic as a way of life, and live third class life in India. We have sold media, We are third class in quality of issues which discuss among ourselves, We are highly biased to self interest, We hardly think beyond ourselves, Our Public sector banks are scam of political parties. We are more concerns and can easily divided by our caste, religion. We are taught to be shameful on our culture, identity.

I have one single point way to judge media. Tell me, After watching it, Would you feel PRIDE as Nation? Nope! We have 100 good news and 10 bad news, but its all selective journalism.
It's not our media. Yes, show realities, but whose hunger will go away from watching issues related Mumbai-Delhi as these journalist stay there? I hardly see anyone covering north east , remotest places of India where real problems cripping in?

We still grown as Nation. Not because of some Govt , but despite them.

I feel We must file a case against all nations who looted us. Let those so called developed & highly civilized nations realized - how badly they looted us? How they destroyed our identity, wisdom and education in planned manner. They destroyed our culture so society so family so we can be divided and ruled.

People change, Govt change which brings change. Its cycle. So we need to change. Things will be difficult in the future and we need to be prepared. We desperately needs some great visionary and we need to stand with him/her. We believe in Avatar, awaiting Kalki to sort out our issue. As we united behind someone, let's figure out who that can be from society today.
I feel we are blessed with one such fellow is Dr Subramanian Swami. He has divide blessing for sure, if you disagree, attend his session you will feel vibes. He is crusader against corruption, corrupts, hypocrisy, mediocracy, pseudo secularism, injustice, and the scam of feeling shame on our culture, identity and pride. He has a great role to play in the future, and if given and we support, We will be entering into golden era. My suggestion: talk about it around, stand above your normal habit of self interest, because if we will not, We will suffer huge. and next generation more, which we hardly think about.

Nation do not get developed by just GDP. Its needs to identify itself.
It needs to ask the basic question: Who are we! So the long journey can begin!
Journey to regaining our old glory!
"Sone ki chidiya: the golden bird of the world!".

Don't be Teacher in Markets & Life. Always be a Student.

Note: Don't copy any quotes without permission from this website.
at 8:46 PM No comments:

Economy runs on few things about which I will try to put my comments, its been a last 2 years thinking and much more pain.

Dogma of CXO - Search for meaning of Sustainability in era of dying Growth!

After brainwashing us to be reckless growth chaser on COST of anything & everything, like a boomerang, or as we call Karma in Indian philosophy, the clueless caste of CXO are in Catch-22 situation on Dogma of that growth!
Either execute your dogma or quit, and in survival instinct, they would reach to every (yes, every) options suggested by their consultant (followers who are ready to replace them as inherent self motives) & will through axes on their roots. Ultimately, the Truth will prevail, but its course of decades, while we are designed to be generation of instant noodles & gratification.
Do wait, a new theory going to be thrown for the mass Consumption, until we realize and adopt Human dimension of existence & ecology to peace, harmony & Life full of opportunities to solve our Basic Problems.
Life is a full circle but the diameter is so long that We start thinking we are on joyful ride of straight growth line. While we as humanity evolve more & sustain when we travel respecting the circle while lifting the plane itself. Otherwise circle will bring us to same point on same plane. Wiser will be to be on higher planes and so higher state of the point. 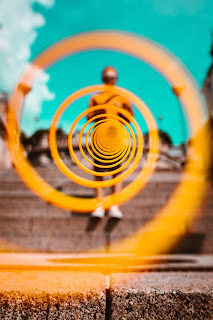 Any Investment must come from Self Conviction, and is more relevant to Equities. And Conviction will come from Knowing 1% of UNKNOWNs in UNKNOWABLEs mystic world. I honestly accept that what ever I am writing and conveying here is same 1% or less than that. So please educate yourself and take decision considering Warren Buffer's first principle of Investing "Do not loose your capital" in any case. In short, please consult your Financial Adviser, I do NOT recommend any BUY or SELL here, its purely my own perception with a RIGHT TO GO WRONG. And as a disclosure I MAY have position in stocks mentioned and MAY sell them anytime as per my conviction level.